After watching the most recent episode of Agents of SHIELD, A Hen in a Wolfhouse, we decided it’s only right that we tell the world how we’re feeling about the game changers in this episode.

1. Ward is given more trust in recent episodes. Do we think he deserves this trust?

CARRINGTON WALSH: I am truly conflicted when it comes to Ward. I want to trust him, but then again how can we know he’s not manipulating the group again? However, I think that SHIELD is in a corner, and they need as much help as they can get. If Ward can be the potential help, I think they should go for it. Perhaps we will begin to see that once he is given more trust, he begins to act more like the Ward we once knew, and less like the crazy locked-up man he is now.I hope that, as Ward gains more trust, he can redeem himself so he can join the dream team again.

ANGELICA MEANS: I don’t understand how you could love Ward so much. I mean, I guess he’s a bit misunderstood, but he still did all those horrible and unforgivable things (tried to kill FitzSimmons) without having to be brainwashed. Honestly, he seemed strong enough to leave Garrett, especially considering Garrett was in the state that he was. If the issue was that he had nobody else, he had a new team and family that would have accepted him. I guess now he’s doing good by Skye (and I suppose some of the others like Fitz). They do really need that help with HYDRA and he’s providing some good intel and advice. I think, while he is still very much at fault for what he’s done and must pay for what he’s done, he seems to be trying to make up for it and does care for at least some members of the group. Oh… I just realized I haven’t really answered the question. I think we should find credibility in what he says, at least to Skye, but we shouldn’t completely trust him yet. The trust he broke shattered into a million tiny pieces and he’s going to have to work really hard to get that back. The team can’t trust him completely yet for many reasons like that, but also because it shows weakness. They need to show him how cold they can be and how serious they are, they will not just accept him back with warm and open arms. 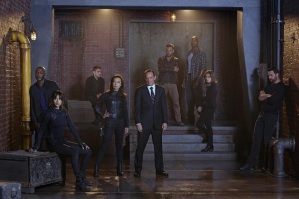 2. What are we looking forward to this season?

CARRINGTON: After the most recent episode, I am quite excited for the banter to ensue between Hunter and Bobbi. Hunter’s personality is big enough as it is. I’m excited to see how his character will react to conflict such as this. BUT I’m most excited to see Fitz and Simmons love and trust each other again. Seeing their reunion in this last episode broke my heart. Perhaps Simmons feels guilty and Fitz feels alienated. Those two traits combined proved to create an awkward reunion. I just want to see Fitz and Simmons happy and working together again.

ANGELICA: AHHHHHH, FitzSimmons being back together! I love them together and they really need each other, especially Fitz. I’m excited (maybe not very happy though) to see how they are going to fit in with each other again. It will be awkward. Fitz finally stopped imagining Simmons and now she’s actually back. Also, he needs to learn how to trust her again after she left right after his accident. I’m sure if she explains why she left it might take off a little bit of stress, maybe. they also have to deal with the whole confession thing. I can only hope that Simmons realized her love for Fitz while her life was in danger and all will be well, but this is Marvel so I don’t a lot of hope.

I’m also excited to see how the dynamics of the team will change with the returners and the new people and the drama bombs. I mean, Simmons and Bobbi will make very interesting additions. On their own, they shake up quite a lot, what with Bobbi being the evil ex we’ve heard so much about from Hunter. Also, the whole Skye’s father thing and how he sucks, as well as his new alliance with HYDRA. ALSO, Skye’s new discovery about her genetics. AND ALSO, her discovery about the map thing. ALSO, there are a lot of alsos. A lot of things. They all happened. It is getting intense. I am looking forward to how the intensity will be handled and the effects it will have.

3. Skye’s father is introduced this episode. What do think about his character thus far?

CARRINGTON: At first, I thought this could be a fun thing. We found Skye’s dad! Hooray! But then I saw what type of person he is. Clearly this isn’t someone I will enjoy seeing in Skye’s life. Furthermore, he clearly wants to be with Skye and will do anything to get there. When he met with Hydra to coordinate a scheme against Coulson, I immediately knew that this would not be the person that would be able to befriend Skye or her friends.

In my opinion, I think Coulson a much better father figure for Skye than her biological father will be. He’s been kind and accepting of Skye and has done nothing conniving towards her. Skye’s biological father has only been in one episode and he’s already begun scheming against the people that Skye loves.

ANGELICA: Idiot. He’s just an idiot in the purest form. He has spent so much time trying to find his daughter, but then he’s like, nah, let’s all just hate Coulson and kill everybody. I mean, sure, if I saw somebody else being a parental figure to my child, I’d get a bit jealous, but how could you hate somebody that takes good care of her. It’s not like he brainwashed Skye to turn her against her father. Also, he killed people in cold blood and was surprised when his daughter wasn’t happy with that. What did you expect? Did you think she would look at the bodies and be like, “omg thanks dad, you’re the greatest and I can tell you would be such a great parent. I love you”? And then, what? Make it even worse by scheming with Skye’s biggest enemy and deciding to kill everybody, even her? That’ll definitely get him the Dad of the Year Award. 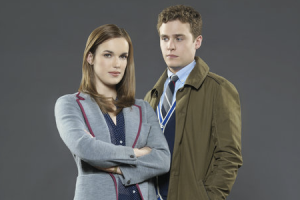 4. Name your OTP and BroTP.

CARRINGTON: My OTP will always be Skye and Ward. But until Ward can redeem himself, my OTP is Skye and Hunter. I think that could be a good fling for Skye, unless the writers decide to toy with us and Bobbi and Hunter get back together again. Then my OTP will once again go up in flames. Oh well.

BroTP will always be FitzSimmons, since I don’t see them becoming a couple in the near future. That is not to say that I don’t hope they become a couple. I do. I really, really do.

ANGELICA: What?!?!? Well my OTP and BrOTP are both FitzSimmons because there’s just so much there, but if I had to make them only one, they’d probably be my OTP. BrOTPs at the moment are Mack/Fitz and Bobbi/Jemma. Also probably Skye/Hunter. Honestly, almost any partnership between any of them could be a BrOTP for me because I see them forming such awesome friendships and connections and teams and overall just kicking a ton of… butt.

Share our opinions or think totally differently? Tell us in the comments!