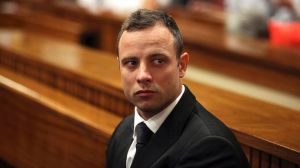 In 2012, the world fell in love with South African runner Oscar Pistorius, the first double leg amputee to compete in the Summer Olympics. He became a hero for thousands of disabled children and an inspiration for us all when made it to semi-finals in the men’s 400 meter and cinched eighth place in the men’s 4 x 100 meter relay. So it came as a total shock when, on February 14th was accused of shooting and killing his long-time girlfriend Reeva Steenkamp.

The trial began on March 3rd, 2013, and continued until the 20th of May when court was adjourned so that Pistorius could undergo psychological evaluation to determine if he could be held criminally responsible for Steenkamp’s murder. The state prosecute stated that “Mr. Pistorius did not suffer from a mental illness or defect that would have rendered him criminally not responsible for the offense charged.” On September 12th 2013, the court ruled that Pistorius was not guilty of murder but he was found guilty of culpable homicide and reckless endangerment for discharging a firearm in public.

On Wednesday, October 21, 2014, Pistorius was sentences to five years in Kgosi Mampuru Prison. His family says that rather than seek an appeal, PIstorius welcomes the opportunity to “pay back to society”.

View all posts by mollyegger