The Academy Awards are less than a month away, and the nominations were recently released. For Best Picture, the following films are nominated: “Whiplash,” “Theory of Everything,” “The Imitation Game,” “Birdman,” “Selma,” “American Sniper,” “Grand Budapest Hotel,” and “Boyhood.” After viewing a number of them, I have many emotions and opinions regarding the films. I will try my best to sum them up into one paragraph, so you can decide which are worth seeing. 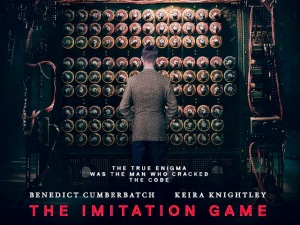 “The Imitation Game,” directed by Morten Tyldum and starring Benedict Cumberbatch, is the incredible story of Alan Turing, whose invention was a monumental force in ending WWII. In the film, Alan Turing struggles to crack the Enigma code, created by the Germans, which will help the Allies win the war. Out of all the Best Picture nominees I’ve seen this year, this may be my favorite. The story is moving, and the acting is stellar. I believe that movies should make the audience feel. This film definitely succeeded in making me feel. I was heartbroken by Alan Turing’s childhood experiences; I cried watching his powerfully emotional spiral down; my heart dropped when I realized Alan was in danger because he was a homosexual, or too logical to socialize like the others, etc. Overall, I adored the film and it’s story. By the end of the movie, I wanted to build a computer. Or take a coding class, at the least.

The acting is also superb. While some criticize that Benedict Cumberbatch, who is nominated for Best Actor at the Oscars, shouldn’t win the Oscar because he plays very similar characters, I disagree. Although his most popular role of Sherlock is similar to the role of Alan Turing, Alan Turing shows more raw emotion that I’ve seen out of Sherlock in all three seasons. Cumberbatch’s portrayal of Turing made me feel more than any other movie I’ve seen this year. And for that, I think Benedict Cumberbatch deserves the award for Best Actor.

The premise of the film, “Boyhood,” written and directed by Richard Linklater, is so next level, and is one of the reasons why it’s so great. “Boyhood” was filmed over twelve years, thus truly showing the development and growth of a child from the age of 6 to 18. The film follows a boy and his family as he grows up. I was in awe watching these kids grow up, and watching the parents age, because I’ve never been able to watch a person grow over a period of twelve years in one sitting. Furthermore, it found it interesting to watch how his family situation changed as years went on. From living in one city to another, to having different step-parents over the years, etc. Watching different stages of life in two and a half hours is a super neat thing to see. Of course, the novelty of the film isn’t the only great thing about it. The story is interesting, and real. I felt I was intruding upon someone’s life. The drama which occurred between the family is real drama that could happen to anyone, which is why it moved me. The filming technique and the story make the film a great watch.

Just about everyone I’ve talked to about “Birdman” has loved the movie. I, on the other hand, did not. “Birdman” didn’t really tell a story. The film followed a washed-up action star as he transitions to Broadway. The main character, Riggan, struggles with the play at hand for numerous reasons and that’s what the film circles around. However, I never really felt like the story was going anywhere. To me, it felt like one thing would happen, then another would happen, and they’d step closer to the play either being a disaster or a success, but there was no plot. Michael Keaton’s portrayal of Riggan is unique, and many hail it as an incredible and Oscar worthy performance. However, in my opinion, if a film doesn’t make me feel for the characters or make me crave that the characters succeed, I don’t think a film has done it’s job. “Birdman” is a long and tedious movie, that really brought me no other joy than to compose a tweet about why I disliked it. Here’s the tweet, in case you’re truly interested in my critiquing skills in under 140 characters.

There is so much hype surrounding #Birdman, but it honestly isn’t that great. It’s indie & intriguing, but it’s not mind blowing or moving.

The story of Chris Kyle is absolutely incredible; however, I don’t think “American Sniper” captured it as well as it could have. “American Sniper” follows the story of a legendary Navy Seal as he goes on four tours to the Middle East. I felt the film lightly touched on the physical trauma of soldiers after returning home. They touched even less on mental trauma, which I feel was an extremely key part to the movie. To me, the film felt a bit detached. As if the characters were fighting a war, but they weren’t feeling the emotions and fully understanding what their actions meant. For instance, I don’t believe human life was valued enough in the film. So many characters died, but no one took the time to realize that someone’s life was taken away. And, of course, it glorified the American soldiers, made the enemy appear horrific, and completely forgot to mention the innocent people drawn into a conflict simply because they live in a war zone. I think the movie had great potential, but wasn’t stellar.

So, “Interstellar” isn’t a movie up for Best Picture, nor is it up for many Academy Awards, but I think it should have been nominated for Best Picture. “Interstellar” follows an astronaut as he leaves Earth in search of another planet for humans to live on. Matthew McConaughey stars along with Anne Hathaway and Jessica Chastain. One of the many reasons I adored the film are the multiple intelligent female characters with large roles. This can be hard to find in many movies. Another reason why I love this movie is the movie is nearly 3 hours long, and never did I think “Wow, this movie is dragging and way too long.” The film kept me on the edge of my seat for three hours. That’s an incredible feat. I feel like this movie was an experience. The images, sound, and acting worked together so perfectly to craft a beautiful movie and make the audience feel as if they’ve left the Earth we know, entered another universe, and then flew into space. The movie was marvelous and I even teared up in the movie theater, which I try not to do because people will judge you if you cry.