January 21st, 2017 – the day my faith in the American people returned.

I left for the Women’s March in Downtown around ten in the morning and the Culver City metro stop was crowded beyond belief. While my mom and I waited an hour to get into the metro, I was able to observe that even though many were frustrated by the heavy traffic, everyone was happy and excited and people were helping those who had never bought TAP cards before. A man was even walking around and offering doughnut holes to everyone.

It was amazing to see that so many people of different ethnicity, gender and age were gathered in support of the best cause – each other. I was amazed when I finally left the metro and wandered through the streets of mid city Los Angeles; thousands of people were walking in the streets, shoulders touching and smiles matching. Though many signs demonstrated hate of the inauguration, most signs simply called to attention the strength of women and minorities.

My favorite moment of the day was when I was listening to speeches in a very large crowd. All of a sudden, every individual would chant things like, “women’s rights are humans rights” or “yes we can!”, and the sound of all these voices would become incredibly overpowering and I would find myself chanting louder.

Apparently around 750, 000 people participated in the march, breaking the record internationally. Though many believe they had joined a protest, it became evident to me that it was more of a celebration of every unique individual.

I am so proud that I was able to join my friends, my neighbors and my community in one of the greatest events of the year. January 21st, 2017 – the day I realized that we are all in it for each other. 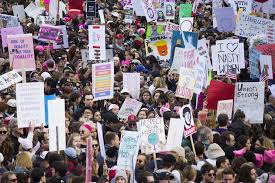 View all posts by Lilou Redon